A major influence on Impressionism was Japanese art prints (Japonisme).

The term Japonisme was coined by the French journalist and art critic Philippe Burty in an article published in 1876 to describe the strong interest for Japanese artworks and decorative items.

In 1867,  Japan held its first formal arts and crafts exhibition at the Paris Exposition Universelle. The exhibition attracted a great deal of interest and resulted in all things Japanese becoming stylish and fashionable. Shops selling Japanese woodblock prints, kimonos, fans and antiquities popped up in Paris like mushrooms.

In the images below, you’ll see paintings by Edouard Manet and James Tissot, indicating that artists visited the 1867 and later expositions, as well as the shops selling Japanese items.

The Japanese Women in the Late Paris International Exhibition, France, 1867

Siegried Bing, who is known as the founder of L’Art Nouveau, began collecting Oriental art and design from the mid 1870s and by the 1880s, after a year long visit to the Orient, he was running no less that three stores in Paris and had become one of the most influential dealers of Japanese art in Europe. In 1890 he organised an exhibition of Japanese woodcuts.

Bing also published a richly illustrated journal, Le Japon Artistique, between 1888 and 1891 which was intended to promote the principles of Japanese design amongst European artists.  He argued that the art of the two nations was united by “ a bond of kinship born of the same love of beauty“*.   Louis Gonse had already published a comprehensive study of Japanese art in two volumes entitled L’Art Japonais in 1883. 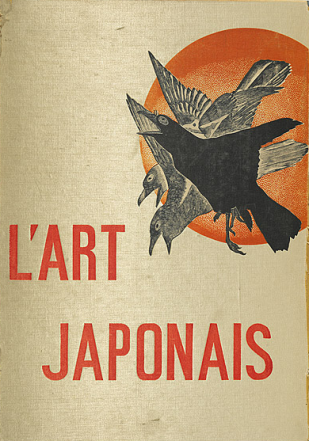 These and other similar publications increased the knowledge and interest in Japanese art.

On the crest of this wave of interest in all things Japanese were woodcut prints by masters of the Ukiyo-e  ‘Floating World’ school of printmaking. The subject matter of the Ukiyo-e in 18th and 19th Centuries was drawn from everyday life, it celebrated the non-heroic and was based on the idea that all is transient. These prints were mass-produced as woodcuts and were cheap enough for the average Japanese person (or Parisian) to afford. Three master printmakers from the period were Utamaro, Hiroshige and Hokusai. 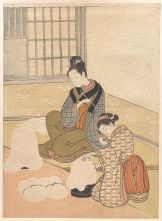 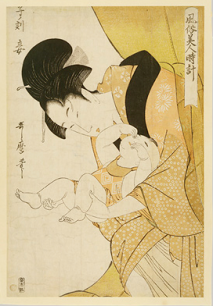 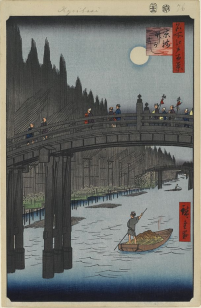 The key features of Ukiyo-e prints were that they:

Many of the Impressionists and Post-Impressionists experimented with Japanese techniques in painting and  printmaking, with a number of artists emulating the Ukiyo-e style.

For example,  Claude Monet painted a number of bridges over ponds in his Waterlily series. He praised the quality of Japanese art that “evokes presence by means of shadow, the whole by means of a fragment“.

Mary Cassatt was particularly interested in print making, often using women and children as her subjects. Edgar Degas reflected many of the compositional styles in his drawings and pastels. Van Gogh was also highly influenced by Japanse design and  both Gauguin and Toulouse-Lautrec are renowned for their large areas of flat colour.

In the painting by Manet below, you can see the Japanese prints and screen in the background. To him, these prints brought proof that you could dispense with perspective and limit yourself to flat colours and lines and still do justice to subject matter – even to subject matter drawn from contemporary life. Manet was amongst a number of the artists of the time who collected Japanese prints and other items for their personal appreciation. 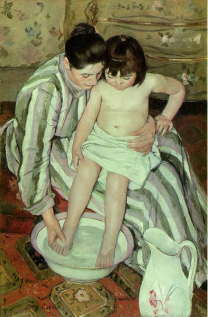 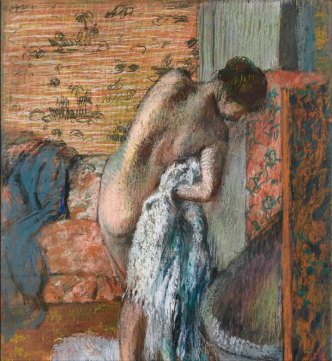 Artists such as Toulouse Lautrec saw the value in printmaking and posters not just in terms of composition, but also as a way to create multiple copies of works at a reasonably inexpensive cost.

Like photography, the style of these prints also contributed significantly to the “snapshot” angles and unconventional compositions which would become characteristic of this movement.

Japonisme transformed Impressionist art by demonstrating that simple, transitory, everyday subjects could be presented in appealingly decorative ways. The Impressionists, and Post-Impressionists, admired the use of flat, decorative shapes, bright colours, and asymmetrical compositions which assisted them in exploring new ways of painting and printmaking.

You’ll also find many French works on paper and beautiful fashion plates from the early 1900s by visiting the gallery.

One thought on “Impressionism – The Influence of Japonisme”