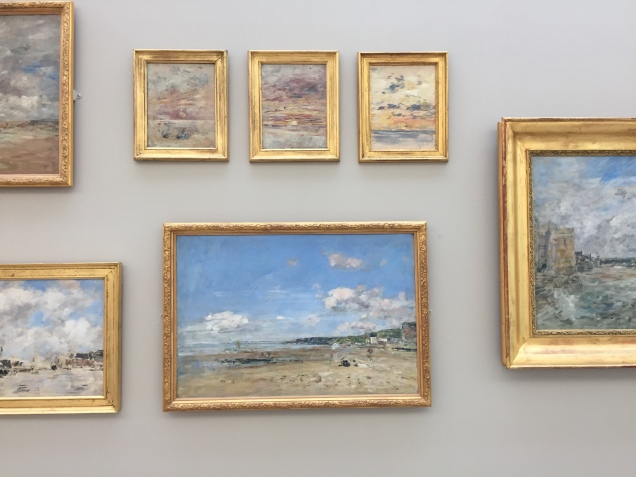 I’m in Honfleur, which is a beautiful old town on the coast in Normandy in France, for few days. Its just the beginning of my 2019 European holiday and I’m excited as my mother’s family are from Normandy. 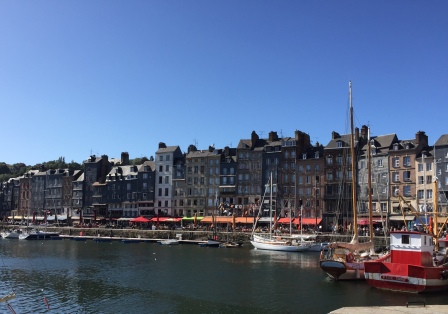 I did a little research before I left to find any galleries in the area, and discovered an artist named Eugène Boudin, after whom the local art museum is named. 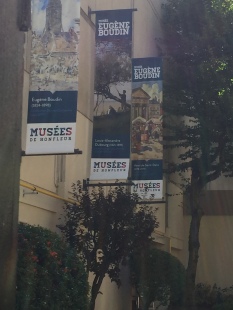 Boudin was born in 1824 in Honfleur where his father operated a ferry service across the Seine estuary between Honfleur and Le Havre. 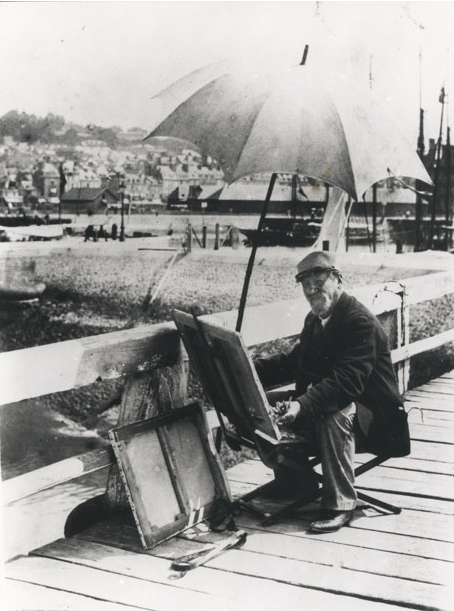 Following an accident on the ferry when he fell almost drowned, his mother sent him to school. Boudin’s abilities were recognised and he was encouraged to develop his artistic talent.

His family moved across the river to Le Havre in 1835,  where his father started a picture framing and stationery business. (Although the research I did was a little contradictory, it is likely that Eugène also had a share in this business.)

During Boudin’s lifetime the Channel coast between France and England was transformed by tourism. By the 1830s some small fishing villages were accommodating visitors from both countries. This included tourists in search of the healthful benefits of sea water and air, as well as artists who took the opportunity to paint scenic locales and peasant life.

Both Jean-Francois Millet (1814-75), a founding members of the French Barbizon School of landscape painting, and Constant Troyon (1810- 65) sold their paintings at the Boudin family shop, and Eugène was able to study their works, and talk such to artists as miniature painter Jean-Baptiste Isabey (1767–1855) and the history painter Thomas Couture (1815–79).

However, his art hero at the time was Dutch landscape master Johan Jongkind (1819-1891).

Sponsored by former artist clients of the framing business, Boudin went to Paris to study and copy in the Louvre, and in 1851 the town of Le Havre awarded him a three-year scholarship to support his study. In Paris he developed an interest in the paintings of Realist painter Jean-Baptiste-Camille Corot.

In 1857 Boudin met the young Claude Monet (who also lived in Le Havre) who spent several months working with him in his studio. The two remained lifelong friends and Monet later paid tribute to Boudin’s early influence.

“If I have become a painter, I owe it to Eugène Boudin.”

By the middle of the 1850s, plein-air painting was becoming an established tradition. Painting styles were changing and artists began to paint nature with a spontaneous approach. Boudin, together with Camille Corot, was a strong influence on young Impressionist painters.

“anything painted directly, on the spot, always has a strength, a power, a lively touch that is lost in the studio. Your first impression is the right one. Stick to it and refuse to budge.“

He began to paint tourist scenes in 1862; at about the same time as a new rail line opened from Paris to Trouville-Deauville, making travel to these resorts much easier. Beach vacationers were unconventional subjects for artists at that time. They had leisure time and money to spend, and were the patrons as well as the subjects of his art.

(Prior to this, paintings of seascapes, if they had figures, they were more typically of fishermen or peasant washerwomen.)

Also, by this time it was much easier to paint out doors portable with easels being available, as well as oil paint  in tubes.

Boudin quickly established the pattern he would follow throughout his career: in summer he traveled to paint outdoor sketches that he would complete in his Paris studio over the winter. He stayed along the Channel coast, mostly in Normandy and Brittany.

Boudin’s growing reputation enabled him to travel extensively in the 1870s. He visited Belgium, the Netherlands, and southern France, and from 1892 to 1895 made regular trips to Venice. He continued to exhibit at the Paris Salons, receiving a third place medal at the Paris Salon of 1881, and a gold medal at the 1889 Exposition Universelle. In 1892 Boudin was made a knight of the Legion d’honneur.

It was against this background that I visited the Eugène Boudin Museum in Honfleur – unfortunately I couldn’t take photos in the gallery so the ones below are some I found online which are representative of works I saw there.

I think they are nice little tourist paintings, but my real surprise came when I visited the Museum of Modern Art at Le Havre the following day and found many more of his artworks. 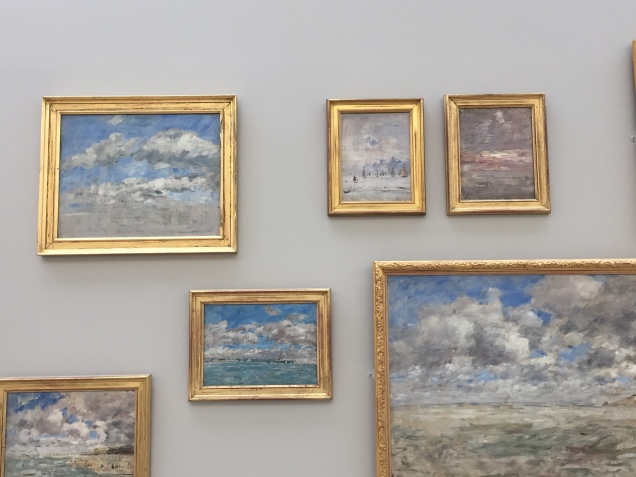 You can see from his use of colour, light and his loose brushstrokes why he would have been such an influence on Claude Monet and other Impressionists  – these artworks capture the time and place beautifully, and are wonderfully modern paintings.

Boudin was nicknamed the “king of the skies” by Camille Carot, and the images above demonstrate why he earned this nickname.

Eugène Boudin was a wonderfully talented artist whom I was delighted to discover, and it’s a shame that he isn’t more well known. Again, another reason why I love to visit galleries when I travel – there are always wonderful surprises.

The Eugène Boudin Gallery in Honfleur

The National Gallery of Art in Washington DC