The rise of Impressionism can be seen in part as a response by artists to the newly established medium of photography. In the same way that Japonisme focused on everyday life, photography also influenced the Impressionists’ interest in capturing a ‘snapshot’ of ordinary people doing everyday things.

The taking of fixed or still images provided a new medium with which to capture reality, and changed the way people in general, and artists in particular, saw the world, and created new artistic opportunities.

Learning from the science of photography, artists developed a range of new painting techniques. And, rather than compete with the ability of the photograph to record ‘ a moment of truth’ the Impressionists, such as Monet, felt free to represent what they saw in an entirely different way – focusing more on light, colour and movement in  a way that was not possible with photography. Over time, these subjective observations became much more widely accepted as works of art, although initially they were thought to be ‘sketchy’ or ‘unfinished’.

In 1839, Daguerre’s disclosure of the secret process he used to record an image onto a silvered sheet of copper, which was the first workable and permanent method to achieve this (known as the Daguerreotype), led to the invention of the photograph, which was to become one of the most popular inventions of the century. 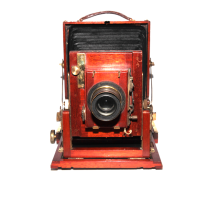 By 1849, some 100,000 Parisians*  were having their pictures taken every year. (Interestingly, in the same way we use Photoshop today, customers often requested that their photograph be re-touched to hide perceived faults, or to add colour.)

Daguerreotypes were unique and non-replicable, but with the introduction of the carte de visite (visiting  or calling card) in the 1850s photographic images could be produced cheaply and easily distributed.  Cartes de visite were prints, usually, albumen, affixed to a card measuring about 6 x 10cm. This standard format was patented by a French photographer, Andre Adolphe Disderi, in 1854. Through the use of a sliding plate holder and a camera with four lenses, eight negatives could be taken on a single 8″ x 10″ glass plate, which allowed eight prints to be made every time the negative was printed.

Cartes de visite were most popular from the 1860s to the 1890s,  largely coinciding with Impressionism.

Some artists found they lost commissions to paint small intricate portraits in favour of people preferring to have studio photographs taken. However, for others it became  an inspiration for new ways of not only composing their artworks but also painting using more experimental techniques.

Photographs (as they do today) assisted in the portraiture painting process. Many artists found that they could do away with tedious sittings of models and instead use both shorter sittings, and photographs, to paint portraits. Portable cameras could also be taken outdoors to record landscapes – enabling the painting process to be completed in the studio.

In the early stages of camera development, long exposures with a camera were required to capture the image, which created ‘shutter-drag’, allowing for beautiful fluid movement and gracefully blurred selections. Some artists, such as Degas, sought to recreate this effect to soften the overall painting.

One of the most famous photographers from the mid 1800s was Nadar (Gaspard Félix Tournachon) who established the most fashionable portrait studio in Paris – it was here that the Impressionists held their first exhibition in 1874.

As the medium developed, photographers like Eadweard Muybridge experimented with the camera’s stilled, or stopped, movement.

Stopping action was a fascinating new concept. Before photographic stop-action, it was difficult to capture a muscle in a state of tension, or the gait of a horse in mid-step, for example. 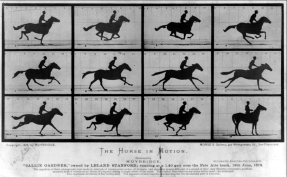 Eadweard Muybridge, The Horse in Motion, 1878

Eadweard Muybridge, The Horse in Motion, 1878, with a sketch by Degas of the second image

Edgar Degas was one Impressionist who was so intrigued with this new ability to capture a moment in time that he also pursued photography as a creative outlet. There are a number of examples of how he used his knowledge of photography in his art, which you can see in his sketches and paintings of race horses. For example, he was amazed that Muybridge’s photos proved that a horse’s feet leave the ground in a rolling sequence, not in the “hobbyhorse” pairs that most artists favoured.

In the above paintings by Degas you can also see the technique of cropping, that is selecting only part of a subject to be included in the picture plane, allowing for a more intimate connection with the viewer, as it creates the illusion that there is a larger scene, just outside of the viewer’s vision. Cropping became an important compositional technique adopted by many artists.

Photography, far from limiting the appeal of paintings, provided artists with new points of view, and encouraged then to translate photographic techniques in their work, enabling them to capture everyday life with a greater sense of vitality and intimacy.