Although most of the modern art movements were centred in France in the early 1900s, one movement which was particularly reflective of the feelings of young artists at this time arose in Germany.

German Expression can be identified by the following features:

The years before World War I (WWI) had seen rapid change across Europe, with the industrialisation of cities, and, as railways began to cross the continent, greater movement within and across countries. Electricity was being installed and other new inventions such as the automobile, gramophone, radio transmission, moving pictures and powered flight were introduced. It was also a period of widespread political change, increased access to education, a breakdown of traditional social classes and the beginnings of women seeking greater independence, including the right to vote.

As a result, many young artists wanted to completely change the meaning and purpose of art.

Around 1904  a group of  student artists in Dresden, including Erich Heckel, Karl Schmidt-Rottluff,  Fitz Bleyl, and Ernst Ludwig Kirschner launched the first German expressionist group, Die Brücke (The Bridge). They believed that art could express the truth of the human condition.

They declared in their manifesto “We want to free our lives and limbs from the long-established older powers. Anyone who renders his creative drive directly and genuinely is one of us”.

Die Brücke felt it wasn’t important to reproduce an aesthetically pleasing impression of the artistic subject matter,  but rather to represent vivid emotional reactions by powerful colours and dynamic compositions.

Several years later, in 1911, a second group in Munich,  Der Blaue Reiter, (The Blue Rider) was established by Wassily Kandinsky, Gabriele Munter and Franc Marc.  This group placed more emphasis on mysticism and created work in a more lyrical style. They also shared an interest in abstracted forms and prismatic colours, which they felt had spiritual values that could counteract the corruption and materialism of their age.

The name “blue rider” refers to a key motif in Kandinsky’s work: the horse and rider, which was for him a symbol of moving beyond realistic representation. The horse was also prominent in Marc’s work, which centred on animals as symbols of rebirth. 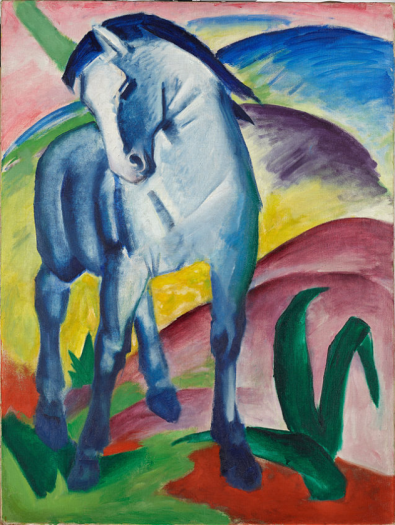 The artists who most influenced the Expressionists were Edvard Munch (for example The Scream), Paul Gauguin and Vincent van Gogh, who also sought to express their emotions through their art. However, for the Expressionists, the emotional strength of their subjects was as important at the colour. A number of the artists had also seen Henri Matisse’s Fauvist work, and they sought to incorporate his ideas about colour. You can also see echoes of cubism in some of Kirchner’s angular paintings of city streets.

Other influences were “primitivistic” art and “naive”  Bavarian folk art and the abstracting tendencies of the bold, poster-like forms and flat patterning in Jugendstil (literally, the “young style”) design (the German equivalent of Art Nouveau).

Most of the German Expressionists were interested in print making, and made prolific use of the three leading print mediums of the time – the woodcut, etching and lithograph. In particular, they were attracted to the woodcut’s long tradition in German history (for example, by Albrecht Durer).

The graphic techniques also offered a less expensive, more immediate way of developing their art than painting. The boldness and flatness that they developed in their woodcuts, in particular, helped them clarify their reductive style in painting. Their simplified or distorted forms and unusually strong, unnatural colours were meant to jolt the viewer and provoke an emotional response.

The Expressionists were most active until the outbreak of WWI. A number of both the Die Brücke and Die Brücke were either killed, injured or deeply affected by the fighting.  As the war progressed, artists reflected their responses to the carnage in their art. For example, Käthe Kollwitz was a prolific printmaker who lost a son in the war, and many of her woodcuts showed the impact on families, particularly women and children.

A third group, Die Neue Sachlichkeit (The New Objectivity) was a pseudo-Expressionist movement founded in Germany in the aftermath of the war. Many of the artists were anti-war. It was characterised by a realistic style combined with a cynical, socially critical philosophical stance.

Otto Dix, George Grosz and Max Beckman were the key artists who aggressively attacked and satirised the evils of society and those in power. They demonstrated in harsh terms the devastating effects of WWI on society,  the general population and the physical damage to individuals. 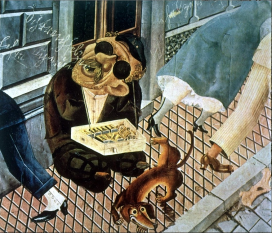 In this e-course, you’ll find a full module on German Expressionism.

If you are interested in German Expressionist prints, you can find a selection of 1957 reproductions at Kiama Art Gallery.

In response to COVID 19 you are invited to undertake my Introduction to European Modern Art History e-course for free during 2020. See more at https://www.modernartappreciation.com/ . Just my way of making a contribution during these difficult times