Deaf and growing old, Goya had no reason to believe that some of his most original work was still before him.

But political intrigue precipitated  on Spain a cruel and unnecessary war – a war that was to present Goya with the backdrop for the work whose vivid truth would help secure him as one of the world’s great artists.” *

In 1808 Napoleon’s armies invaded Spain and Napoleon placed his brother, Joseph Bonaparte, on the throne.

However, before this decision was made public, the Spaniards rose up against Napoleon.

On the second of May, 1808, there were various rumours about Napoleon’s plans and an uneasy crowd gathered in the Puerta del Sol near the palace in Madrid. The crowd grew restless and surged on the French guards. In response, the Spaniards were fired upon by the guards and French re-inforcements were dispatched, including the Mamelukes, who were hated Egyptian mercenaries.

The mob continued their assault – with soldiers being pulled from their horses and attacked with knives and bare hands.

War might have been avoided at this point, but on the following day, the third of May, the French executed all the Spaniards believed to have been connected with the uprising in any way, without trial, at Príncipe Pío, a hill just outside Madrid. Goya also captured this action in his painting, The Third of May 1808, 1814.

French firing squads appeared throughout Spain, with guerrillas warfare (the term, meaning little wars, was coined at the time) as the Spaniards threw themselves on the French soldiers in an impassioned display of nationalism.

Goya’s attitude towards the war was mixed. Born to a small family which was barely genteel, his ambition and considerable talent led him to Spain’s royal court where its wealthiest aristocrats became his patrons. Goya came to artistic maturity during an age of enlightenment whilst Bourbon king Charles III  ruled Spain as a monarch sympathetic to change, employing ministers who supported radical economic, industrial, and agricultural reform. At the age of forty he was appointed painter to the king and was promoted to court painter in 1789, under the newly accessioned Charles IV.

The rule of Charles IV came to an end with Napoleon’s invasion.

Although he was repulsed by the French atrocities, Goya pledged allegiance to Bonaparte, and painted members of the French regime. He was an admirer of the French Enlightenment and considered that French rule might be an improvement on the inadequacies of Charles IV. In 1811, he was awarded the Royal Order of Spain.

After Napoleon’s fall in 1814, Ferdinand VII (the son of Charles IV), who took over the throne, revoked the Constitution, reinstated the Inquisition, and declared himself absolute monarch. Not long afterwards, he launched a reign of terror.

In response,  Goya demonstrated his allegiance to the new king by commemorating Spain’s uprising against the French, including both the Second of May and Third of May paintings.

The Third of May 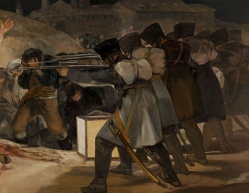 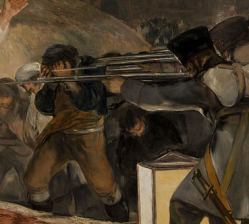 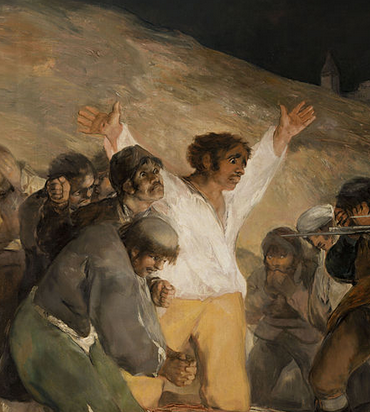 The Third of May, 1808 shows the executioners as anonymous soldiers obeying orders by killing the suspects lined up in front of them.

The focal point of the picture is the man in the white shirt.   His expression is of horror, disbelief and pride. His outstretched arms inevitably recalling Christ on the Cross – a defiant gesture of indescribable power. The coarse, swarthy, dilated face – all vitality. Beside him a man stares at his executioners, while a monk stars at the ground and clasps his hands in prayer.

The next group of victims trudge the hill to their  terrible fate.  The faces of the pueblo, the Spanish people, keep their individuality right up to the edge of the mass grave. They are in contrast to the utter anonymity of the firing squad – they are a faceless line displaying machine-like efficiency .

For dramatic effect, Goya shows the scene taking place at  night, although in fact the killings were carried out during the day.

He has used a limited range of black and brown tones relieved by splashes of bright colour, such as the brilliant white light of the lantern and red of the shirt. The remarkably free handling a paint which Goya applied with his fingers and knives, as well as brushes, add to the overall dynamism of the scene.

(Goya continued his account of the atrocities of war in a series of eighty-five prints called The Disasters of War  which depict the travesties witnessed during Spain’s struggle for independence from France.)

Before Goya, artists had traditionally shown war as a heroic, enabling act, painted on huge canvases, with cheering crowds. However, Goya painted was as it actually was – with the occasional acts of heroism, but more often not the brutalisation of men who committed atrocities upon others – and the hunger, deprivation and misery which ravaged the country.