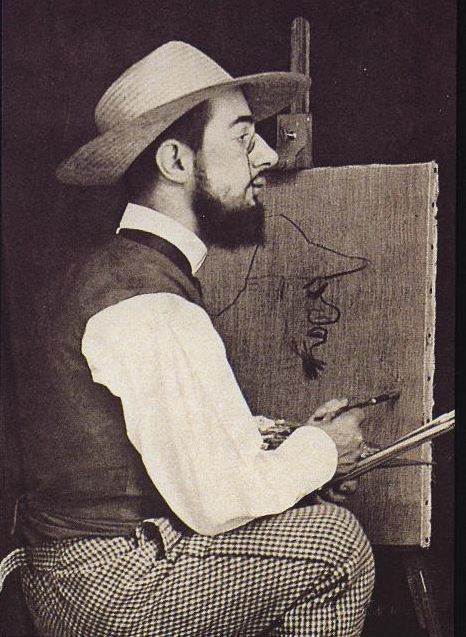 Aristocratic and wealthy,  painter and printmaker Toulouse Lautrec inherited a genetic disorder that left him with stunted growth, after two accidents in which he broke both legs as a teenager. Whilst he was recovering, Lautrec turned to drawing and painting, both of which he developed a great love for.

The young Henri moved from Albi to Paris in 1882 to study art, where he met the artists Emile Bernard and Vincent van Gogh, and was attracted by the work of the Impressionist artist Edgar Degas (as can be seen in his lithographs of jockeys and horses, for example).

His career, which lasted just over a decade, coincided with two major developments in late nineteenth-century Paris: the birth of modern printmaking and the explosion of a nightlife culture. As well as paintings and other forms of prints, he produced over 300 lithographs, many of which were advertising posters.

Lautrec lived in the Montmartre section which was the nightlife quarter of cabarets, cafes, restaurants, sleazy dance halls and brothels. Here he became a part of the bohemian community.

In the evenings, he could be seen chatting with friends and drinking, and at the same time drawing sketches on paper. Then the next day, he would transform the sketches into paintings and lithographs.

Lautrec created his first lithograph in 1891. When he was commissioned to create a poster advertising the Moulin Rouge, he elevated the lithograph as a popular medium for advertising to the realm of high art.

Over three thousand copies of his Moulin Rouge, La Goulue were pasted on the walls around Paris, prompting an outpouring of popular and critical acclaim and turning the young artist into an overnight sensation.

The style and content of his posters were heavily influenced by  Japanese ukiyo-e woodblock prints by artists such as Katsushika Hokusai (1760–1849) and Ando Hiroshige (1797–1858), which typically feature areas of flat colour bound by strong outlines, silhouettes, cropped compositions and oblique angles.

Katsuskika Hokusai, Under the Wave off Kanagawa, c1830-32 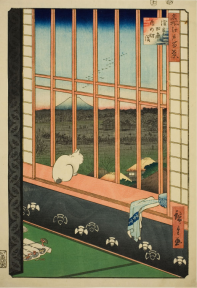 Using new innovations in lithography developed during the late nineteenth century, Lautrec was able to produce larger prints, use varied colours, and introduce nuanced textures which conveyed the rapid pace of contemporary life.

He frequently used the spattered ink technique known as crachis, seen in his series of prints depicting Miss Loïe Fuller. Fuller was an American famous in fin-de-siècle (end of century) Paris for her performances combining dance, multi-coloured artificial lights (her nickname was the “Electric Fairy”) and music. As she twirled and bounded across the stage enormous lengths of fabric would billow outward from her body and reflect the coloured lights which created a spectacular effect.

Lautrec executed about sixty versions Miss Fuller dancing, in a variety of coloured inks, including gold and silver, which evoke the effect of her performances. 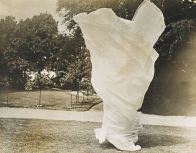 Another of Lautrec’s favourite café/concert stars was Yvette Guilbert, who was known as adiseuse or speaker because of the way she half-sang, half-spoke her songs during performances. She had bright red hair, thin lips, a tall gaunt physique, and wore black elbow-length gloves. Although her head is cropped by the top edge of the composition, her elongated body and trademark gloves in the upper left corner of the poster Divan Japonais leave no doubt as to her identity.

Similarly, the pinched features and aloof demeanour of the singer Jane Avril, seated in the foreground of the image wearing one of her famously outlandish hats, is also clearly representative of Lautrec’s style.

As well as his representation of the Paris nightlife, Lautrec is also known for his lithographs of jockeys and horses – horse racing was seen then, as now, as a pleasurable pass-time.

With his lithographs, Henri Toulouse-Lautrec influenced French art through his ability to capture the essence of a subject with economical means, his stylistic innovations, use of large areas of flat colour, and promotion of the use of prints as a popular (and affordable) form of artwork. 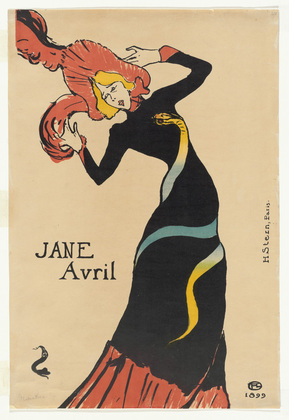 Unfortunately his career was short lived, as he died at age thirty-six due to complications from alcoholism and syphilis.

Lithographic prints are based on the principle that water and oil repel one another. To create a lithograph an artist draws on a hard, flat surface, usually a pre- flattened stone such as limestone, with an oil-based material such as lithographic crayon. The stone is then washed with water, which covers the blank areas of the surface but is repelled by the oil based image. Greasy printing ink is rolled over the stone which adheres only to the image. Finally, paper is laid on the surface and pressure is applied to create the lithographic print, which is a mirror image of the original drawing. To create colour lithographs, the artist uses a separate stone for each colour and the image is gradually built up. Lautrec used no more than eight colours in his lithographs (so they never appear too “busy”). The introduction of the steam press allowed for rapid production, multiple colours, and large scale lithographic prints.