I’d like to introduce two artists, one from Paris and one from Sydney, whose work I consider to show remarkable Post Impressionist similarity.  The artists are Lucie Cousturier (1876 – 1925) and Grace Cossington Smith (1892 – 1984).

Grace Cossington Smith, Study of A Head, Self Portrait,1916

In researching French artist and writer, Lucie Cousturier¹,  for my art history e-course, I came across a painting, Femme Faisant Du Crochet, that immediately reminded me of an iconic Australian painting, The Sock Knitter, painted in 1915 by Grace Cossington Smith. 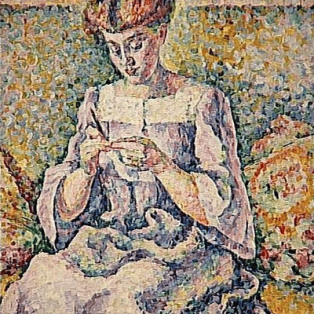 The Sock Knitter is considered by many to be the first Australian truly Modernist (Post Impressionist) painting because of the bold forms and use of colour. It’s perhaps all the more remarkable because although she has been drawing for many years, when Cossington Smith painted this at the age of 23, she has only been painting for a year. The painting is of her sister, Madge, and shows her knitting socks for the war effort for the first World War.

My immediate question was, Could Grace Cossington Smith have seen the painting by Lucie Cousturier and been influenced by it?

Lucie Cousturier was born in Paris and became interested in painting at the age of fourteen, and studied under Post Impressionists Paul Signac and Henri-Edmond Cross. She was also a close friend of the pointillist Georges Seurat. It’s also obvious from looking at her range of paintings  that she was influenced by Cezanne. 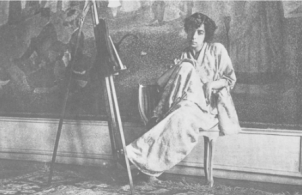 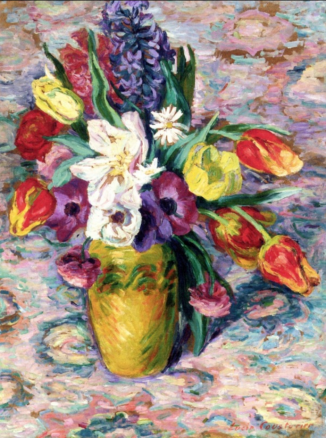 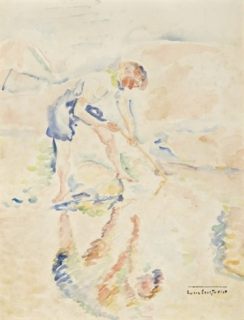 Cousturier first exhibited at the Salon des Artistes Indépendants in 1901, and was to exhibit three to eight oil paintings at the Salon every year until 1920. She exhibited at other exhibitions in Brussels and Berlin, and at the end of 1906 gave her first solo exhibition in Paris. By 1907 she had mastered her technique and use of colour. In her later paintings, particularly outdoors scenes, her style became increasingly fluid and free, with warm and lively colours. Her work was also exhibited at the Berheim-Juene Gallery in Paris.

As well as being an artist, Cousturier was an accomplished writer – writing biographies of other pointillist artists such as Georges Seurat, Paul Signac and Henri-Edmond Cross, as well as books about Senegalese soldiers in France and her travel to Africa.  In October 1923, 164 of her drawings and watercolours from her African journey were included in an exhibition at the Galerie de Bruxelles, together with  works by Paul Signac.

The painting which caught my eye, Femme Faisant Du Crochet, was painted around 1908.

You can see a strong similarity in style between the two paintings – both young women in silent contemplation as they go about their craft – both dominate the picture plane. Both paintings are Post Impressionist – Cousturier’s being more in style of Paul Signac and Henri-Edmond Cross with her use of Divisionist brush strokes and Cossington Smith’s being more in the style of van Gogh, with her use of broader choppy brushstrokes to delineate form.  (You can see how she has used a similar technique in her self portrait painted a year later.)

What I do appreciate about the two paintings is that they both reflect a moment in time – Cousturier’s being painted in France in warmer months prior to the first world war, and Cossingston Smith’s being painted in colder months in Australia, not long after the war commenced. Even the colours used in the paintings reflect the mood and relative temperatures.

Both artists have also worked in patterns, and geometry plays a strong part in their composition.

Was there any connection between the two artists?

At this early stage in her career, Cossington Smith was looking to learn as much as she could from European artists.

So, given that she hadn’t travelled to Paris before her painting was completed, is there any way that Cossington Smith would have seen a reproduction of Cousturier’s work?

We know that Cossington Smith travelled to London in 1912, where she had lessons at the Winchester School of Art, and that she also travelled to Germany. Although there isn’t a record of the exhibitions she attended between 1912 and 1914, which is when she returned to Australia, she did state that she was a little disappointed by the Impressionist works she had seen whilst overseas².

In Sydney, Cossington Smith studied art under Dattilo Rubbo.  Rubbo has a great feeling for the colour of the  Impressionists and Post Impressionists including van Gogh, Cézanne, Pissaro, Sisley, Gauguin, Vuillard, Seurat and Italian artist Giovanni Segantini³. He placed reproductions of works by these artists in his studio, following a trip he took to Europe for several months in 1906 (before the work by Cousturier was exhibited), and these reproductions certainly did influence his students. 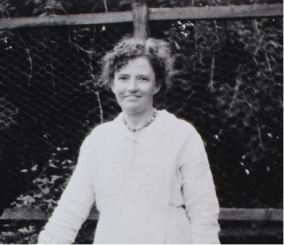 One of these students, Norah Simpson, also travelled to England in 1912-13, and she also brought back a number of reproductions of the Post Impressionists from both England and Europe, which she showed with great enthusiasm to Rubbo’s students.  She and Cossington Smith spoke a great deal about what she had seen whilst she was overseas, and it was only a year later that Cossington Smith began work on The Sock Knitter.

Is it possible that Norah Simpson brought back a reproduction of the work by Lucie Cousturier?  Was the painting included in any of the catalogues for the exhibitions in which her work was shown – for example at the Salon of the Society of Independent Artists, in Paris in 1909, which Simpson may have acquired whilst overseas?

Rubbo also had a practice of inviting artists to talk to his students during their lunch break, so it may have been that a guest speaker introduced the students to the work of Cousturier.

Whether or not Cossington Smith was influenced by Lucie Cousturier, or other artists in her circle, or the similarities are just co-incidental as Cossington Smith sought to develop her own modern style, remains a is a tantalizing mystery, which is a great part of my fascination with art history.

You might like to know more about my art history e-course, Introduction to Modern European Art  which is designed for adult learners and students of art history.

In response to COVID 19 you are invited to undertake my Introduction to European Modern Art History e-course for free during 2020. See more at https://www.modernartappreciation.com/ . Just my way of making a contribution during these difficult times