Seurat is best known for his scientific approach to painting – in particular the optics of  colour – which lead him to develop a particular style of placing small dots of colour next to each other, which became known as either Divisionism or Pointillism.

Although Seurat embraced the subject matter of modern life preferred by the Impressionists, he went beyond their focus on capturing the accidental and instantaneous qualities of light in nature.

He wanted to evoke permanence in his work by referencing art from the past, especially Egyptian and Greek sculpture and even Italian Renaissance frescoes. As he explained to the French poet Gustave Kahn, “The Panathenaeans of Phidias formed a procession. I want to make modern people, in their essential traits, move about as they do on those friezes, and place them on canvases organized by harmonies of colour.” (source: http://www.artic.edu)

A key work in which he sought to combine all of these features was A Sunday Afternoon on  Grande Jatte which he commenced work on in the summer of 1884. The painting, which measures two by three metres (seven by 10 feet),  shows members of each of the social classes at a popular park at the island of La Grande Jatte, participating in various activities a  sunny Sunday afternoon.   The work comprises 48 people,  three dogs and eight boats.

It took him two years to complete.

He spent much of his time in the park sketching in preparation for the work, including a smaller version, Study for A Sunday Afternoon on the Island of La Grande Jatte (1884–1885). However, he also completed a number of his studies in the studio.

The planning and choice of characters for La Grande Jatte was as complex as the work itself and Seurat undertook many sketched drafts before he arrived on the final plan for the painted piece. Overall, his painting of the work involved 28 drawings, 28 panels and three larger canvases. (I think that the drawing sketches for this work are exquisite.)

To achieve the effect he was seeking, Seurat began developing the painting with a layer of small horizontal brushstrokes of complementary colours. He later added small dots, also in complementary colours, that appear as solid and luminous forms when seen from a distance. The tiny juxtaposed dots of multi-colored paint allow the viewer’s eye to blend colours optically, rather than having the colours physically blended on the canvas. In comparison, the juxtaposed touches of colour that are woven together with short, patchy brushstrokes in the Study are more systematically applied, with discrete daubs of paint, in the final work.

On Pissarro’s advice, Seurat painted the final canvas with a  zinc chromate yellow pigment  that he hoped would properly capture the highlights of the park’s green grasses however it proved unstable and soon lost its luster. As a result, the Study for A Sunday Afternoon on the Island of La Grande Jatte provides a vital record of the chromatic intensity he had hoped to achieve, which is not evident in the final painting.

Seurat’s style came to be known as Pointillism (from the French word “point,” or “dot”), but he preferred the term Divisionism—the principle of separating colour into small touches placed side-by-side which is meant to blend in the eye of the viewer. (Note: This style is also sometimes referred to a Neo Impressionism.) He felt that colours applied in this way—not mixed on a palette or muddied by overlapping – would retain their integrity and produce a more brilliant, harmonious result.

The painting was criticised by some for being too mathematical. However, when it was exhibited, it was mostly heralded as a grand work of meticulous proportions. Suerat intended it to be exhibited at the Salon des Indépendants of 1885, but the exhibition was cancelled. The change in plans meant that he went back to add details to the work which  mainly consisted of his most recent thoughts on colour and its use in paintings. He also changed the shapes of some of his figures in order to create more sinuous rhythms.

A Sunday Afternoon on the Island of La Grande Jatte was eventually exhibited in the eighth Impressionist exhibition of May 1886, but its style marks it as a Post Impressionist work.

(The final changes were made to La Grande Jatte in 1889. Seurat re-stretched the canvas in order to add a painted border of red, orange, and blue dots that provides a visual transition between the interior of the painting and his specially designed white frame.) 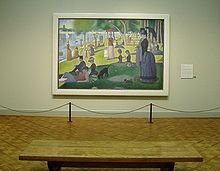 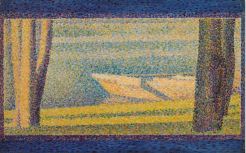 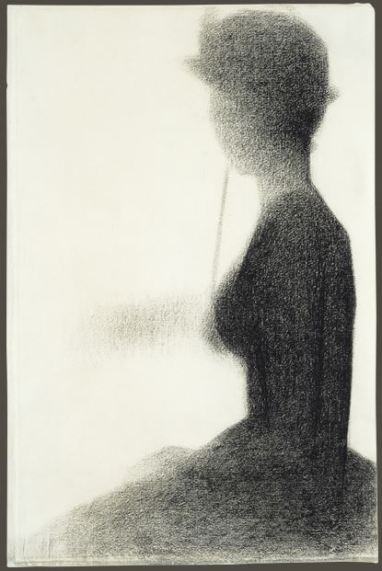 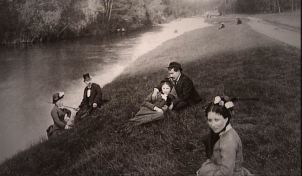 photo of La Grande Jatte from that period 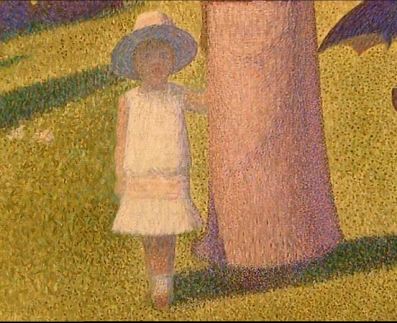 George Seurat, Study for A Sunday on La Grande Jatte, 1884